There were 2 posts tagged: Video Conferencing

Jabra's PanaCast 20 is unlike any other personal USB video camera that we've seen.  It's packed with really great features that provide the best experience possible for a high quality video expereince.  This camera is engineered for intelligent AI-enable personal video conferencing.  It offers 4K Ultra-HD video, AI-enabled image enhancement, Picture-in-Picture, and its lightweight design and carry case makes it extremely portable.

As we all navigate the realities of trying to stay connected and productive, video conferencing is more important than ever. It’s time to experience the next generation of intelligent, secure, portable video collaboration with Jabra PanaCast 20.

Harnessing advanced on-board AI to deliver an intelligent feature set that takes your video experience to the next level, PanaCast 20 is a personal camera that knows exactly what you need, when you need it.

When you’re on an important video call, being seen clearly makes all the difference. Jabra's Intelligent Zoom feature uses powerful AI to continuously scan and adjust your picture in real time, ensuring you’re always in the center of the frame. Now you can experience more immersive, natural video collaboration without having to stay rooted to the spot. PanaCast 20 delivers a meeting experience that’s not just better, it’s completely reinvented.

Today’s professionals need to take video calls from everywhere. With PanaCast 20, AI-based Intelligent Lighting Optimization analyzes your environment and automatically adjusts your image in real-time to enhance the video quality.

Get ready for more engaging presentations with PanaCast 20. Our unique Picture-in-Picture mode enables you to share a close-up as your main image while continuing to present in a smaller window, thanks to on-board Edge processing that combines two real-time video streams into one. What's more Picture-in-Picture mode works with any UC platform, even if they don't support dual-stream devices.

You can’t be camera-ready all the time. That’s why PanaCast 20 comes with an integrated privacy cover, to give you total control. Simply slide the privacy cover across your camera lens when you need privacy, and slide it back again when you’re ready to turn your video on.

When you work flexibly, you can be joining meetings from anywhere. This clever little camera is perfectly portable, with a compact design that easily slots over the top of any screen, an integrated, foldable mounting clip, and a protective carry case. So you’re only ever seconds away from seamless, intelligent, high-quality video collaboration.

From the café to the kitchen table. Enjoy great video meetings anywhere.

Will Video Conferencing make you regret referring to your contact center as ‘multi-channel’? Consider these issues.

A guest post by Mike Dershowitz, the CEO of Rethink Staffing, a Fair Trade Outsourcing Company, and its sister facility, RTS Philly Outsourcing Center. He believes that when companies focus on their employees’ social and economic progress, it motivates them to perform better at work and produce outperforming results. Contact him at 888-631-0398 or mike@rethinkstaffing.com for an initial consultation. Read more from Mike on his Medium site.

As much as the contact center world is deploying AI and bots, like any other business, to optimize its operations with existing humans, or someday replace them, there has been a parallel, growing body of practice known as “Video consumer Service” that is quietly changing our industry as well.

With broadband almost everywhere now, video conferencing has come into the mainstream and is used by many business professionals almost on a daily basis. A 2017 study by IHS Markit stated that 85% of companies surveyed use video conferencing as part of their unified communications environment. 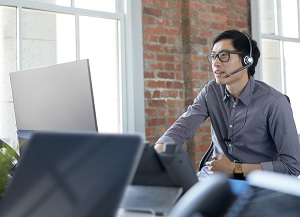 Make no mistake, video consumer service could be coming to your contact center. Video consumer service gives us a fascinating window, not only into the future, but also into a world where “phone etiquette” is insufficient, and a place where bots will not be able to go for decades, if ever.

Asked whether or not we could do this, our answer was “absolutely,” and we had a handful of early Agents who were game. But once we got started, there were a host of issues we definitely had to worry about, for which neither we nor our client was prepared for.

For the uninitiated, video consumer service is simply rendering a consumer service session via video, where you can see the consumer, and your consumers can see you, and interact with you through a microphone, speakers and a webcam. While not for everyone, you’d be surprised how many consumers find it a viable option.

In preparation for the day when a video consumer opportunity may be at your doorstep, here’s a small list of things to consider if one of these comes across your desk:

First up? “Eyelines.” When your consumers can see your agents via video, it’s a whole new ball game about what your contact center actually looks like. The consumer will care, and comment, about what they see. Embarrassment ensues, like the time we inadvertently positioned an agent’s desk in front of the door to the men’s room without realizing it. Luckily all the consumer saw was hands being washed before we caught that mistake and corrected it.

Second: “New Etiquette.” We had to re-write the rules here, on both sides. What shocked us most was how some agents became lax in their behavior on camera, in many cases without noticing it. Like the time that a consumer who went to retrieve a piece of information, and our Agent decided now was a good time to brush her hair, and reapply makeup, and continued to do so when the consumer returned.

Third: “Connection.” Connection and computer speeds at your consumer’s point of contact will vary greatly. While the software for video consumer service should validate your consumer’s technology, this will impact the way your Agents render service. They have to be on the lookout for pauses, echoes, and other impediments to smooth communication. Think back to the early days when we started getting calls from consumers on mobile phones.

Fourth: “Thick Skin.” We had to retrain folks on what they could expect to see from those outlier consumers. No longer were we worried about sarcastic comments, profanity, or yelling. Now, we had to worry about the visual side of all of that, as well as a window into consumer’s lives that turned early agents into enthusiastic voyeurs.

And then there was the time when the Agent, confronted with an attractive member of the opposite sex on their video screen, tried to end the call by getting a date.

In the beginning, while it was certainly an entertaining and a profound window into the human psyche, the video feed ended up normalizing Agent behavior, once they were made aware, much faster than the phone does. Simply put, the human psychological need for esteem and not to be embarrassed turned out to be our biggest ally in creating professional behavior while on video.

Also, it’s important to not neglect the IT issues here. Forget about just good webcams and microphones — that’s table stakes. Your IT department has to worry about massively greater bandwidth consumption, redundancy, congestion, as well as packet routing.

Finally, the intimacy of video is so much greater than the phone; 90% of all human communication is nonverbal. The upside to video consumer service is that when it’s good, your agents feel much better about helping their consumers and the thanks they receive make a much larger impact on them.

So, if you see a video consumer service application come across your desk, I say go for it. If nothing else, it will be challenging and fun. Just make sure you’re prepared for what you’re getting yourself into!